This has been a stellar year for Jacinta Ruru (Raukawa, Ngāti Ranginui me Ngāti Maniapoto), Professor of Law at Otago University.

On 1 January 2016 she commenced her appointment as co-director of Ngā Pae o te Māramatanga, New Zealand’s Māori Centre of Research Excellence, followed closely by her official promotion to professor – the first professor of law of Māori descent – on 1 February 2016. 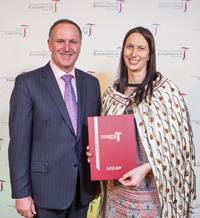 August 2016 she was not only named one of 12 tertiary teachers to receive the national Ako Aotearoa Sustained Teaching Excellence Award, but was awarded the prestigious Prime Minister’s Supreme Award for tertiary teaching excellence.  This recognition is awarded to only one teacher each year and acknowledges her commitment to creating a voice for Māori in the New Zealand legal system, through both teaching and research.

As a celebration of Jacinta’s appointment as professor the Faculty of Law hosted her Inaugural Professorial Lecture (IPL) on 12 September 2016.  An IPL is an opportunity for new professors to be introduced to their colleagues and like minded people in the community, to showcase their research and expertise.  For Jacinta, it was a time for the Dean Professor Mark Henaghan and the University to present her to the wider university and community as “te pounamu o tāu kaupeka tātai ture” – “the jewel of the faculty”. 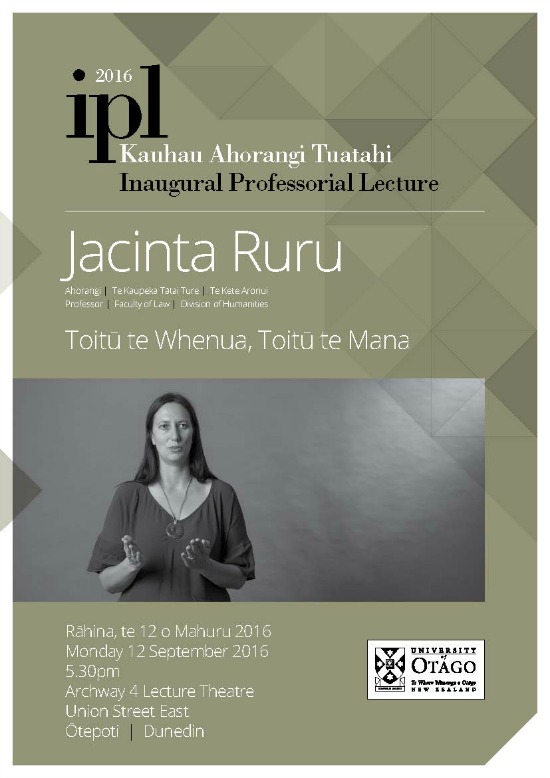 The title of her IPL Toitū te Whenua, Toitū te Mana is a whakataukī (proverb) that can be translated loosely as “the land remains, the authority remains”.  The lecture brought together the law and the whakataukī representing what land is to Māori poetically embracing the meaning of land to Māori and bringing alive the endurance and ‘foreverness’ of the Māori world in Aotearoa New Zealand.

Jacinta’s lecture was remarkable in that it pinpointed her first recollection that something was amiss in the way the majestic Ngāi Tahu lands she grew up exploring were only seen by the public by their “overlaid English names and the Department of Conservation”.  This “unease” she felt at a young age eventually led her to an LLB at Otago, “eventually dreaming for a better, more respectful law to acknowledge indigenous people’s rights, responsibilities and interests to remain governors and stewards of lands and waters essential to cultural identity and survival”.

The journey towards an LLB itself was not simple; as the overarching message to law students that the law is “objective and just” could not be reconciled with the korero of her father’s Raukawa family about dispossession from ancestral lands in the 1860s on, through “insidious legislation and local government rules”.  This perplexing disconnect led to her finding the subject of law as “both shocking and fascinating” and doubtlessly formed the foundation of her teaching pedagogy and passion to support Māori law students.

Through the time of her childhood and days as a law student the acknowledgement of Māori land rights was changing.  From the infamous hikoī march chant of “not one more acre” in 1975;  through the 1980s extension of the Waitangi Tribunal jurisdiction back to 1840; the enactment of the State Owned Enterprises Act 1986 which was the first legislation to expressly state that decisions must not act inconsistently with the principles of the Treaty of Waitangi;  and the eventual conclusive overturning of the Treaty of Waitangi as a “simple nullity (Wi Parata v Bishop of Wellington (1877) 3 NZ Jur (NS) 72 (NZSC)) in Ngāti Apa v Attorney-General [2003] 3 NZLR 643 – Māori were speaking and the government was listening.

At the heart of Jacinta’s journey has been the protection of Māori land and water, the retention of Māori land for Māori and Aotearoa New Zealand.  Amazingly, she can pinpoint her career and research to just three legal events:

The 1998 Act can now be compared with the Te Urewera Act 2014 which unreservedly established what was Te Urewera National Park as a legal identity with protected status, in beautiful language connecting the importance of Te Urewera to Tuhoe and its national importance as a “place of spiritual value, with its own mana and mauri” (background to the Act).

The Te Urewera Act, and other treaty settlement legislation “shows that dreams are possible even in an imperfect legal and political matrix.”

“And so our legal system evolves”, ends the lecture.  There are many challenges and opportunities right now, in the form of the stagnant National Parks Act 1980, the proposed Te Ture Whenua Māori reform and recognition of “continuing Māori ownership of water”.  The night ended with special acknowledgment of whanau and the many others that have guided this young professor’s path, and a standing ovation.

As noted in the mihi whakatau (welcome) of Tuari Potiki Director of Māori Development at Te Whare Wānanga o Otāgo, this recognition as a professor, a co-director of a national research centre and award winning teacher “hasn’t come about by accident, it has come about by amazingly hard work over a long, long period of time.”  That hard work and dedication continues, and one gets the feeling that although 2016 has been a career defining year for Professor Ruru, she remains firmly on an upwards trajectory – there will be much more to come.

Jacinta Ruru is co-General Editor of the forthcoming Thomson Reuters treatise Te Ākinga: The Maori Dimension of New Zealand Law.  She wrote the introduction to and edited the content of the Maori Legislation Handbook 2012, and is a contributing author to Equity and Trusts (2nd edition), Brookers Land Law (online looseleaf service), and Brookers Family Law (online looseleaf service).

Click to view a video of Jacinta’s Inaugural Professorial Lecture

Discover best practice and keep up-to-date with insights on the latest industry trends.

Is there a story you'd like to see on Legal Insight?

How Technology will Direct the Future for Boutique Lawyers

What’s Keeping GCs up at Night in the Asia Region?

Efficiency Milestones for Corporate Legal Teams of all Sizes

Why Knowledge Management is “Business Critical”

State of US Corporate Law Departments Report: Adapting to 2020

Discover best practice and keep up-to-date with insights on the latest industry trends.